This page is dedicated to the memory of Mercedes de Martinez who passed away May 8, 2012.

Born in Cartagena, Colombia on September 24, 1939, to parents Nestor and Ana Modesta, Mercedes Rosario Pineda de Martinez knew from a young age that she wanted to make a difference in the lives of children. Mercedes was quoted saying, “When I was small and people asked me what I was going to be when I grew up, I said I wanted to be the mother of many children.” Throughout her life Mercedes worked tirelessly to fight for the rights of children throughout Colombia and helped thousands of children find forever families across the world.

On February 11, 1961 Mercedes married Arturo Martinez Gomez. Arturo had received his degree in Civil Engineering from Villanova University in Philadelphia in addition to a degree from the National University of Colombia. The couple wished to start a family, but infertility struggles kept them from being able to have children biologically. This led Mercedes and Arturo to adoption.

Due to the fact that at the time domestic adoptions in Colombia were difficult, Mercedes and Arturo turned to Canada to adopt their first child. They were blessed with a daughter, Maria Lucia, on October 16, 1968. They adopted their second daughter, Elena from Colombia on April 10, 1972. The joy of being parents was overwhelming to both Mercedes and Arturo and they always find great joy and strength from their family.

In 1970, when Maria Lucia was two years of age, Mercedes and Arturo had to take her to the Mercy University Hospital in Bogota for medical attention. While there, Mercedes noticed the large number of abandoned children. Mercedes and her mother, Ana Modesta brought blankets, clothes, bottles, diapers and toys for the children. It was this experience that inspired Mercedes to form a foundation to care for abandoned children.

Drawing from her own experiences, Mercedes understood that adoption may be the only way for an abandoned child to ever belong to a loving family. Mercedes firmly believed that every child has the right to a family so that they can be loved and provided with opportunities to reach their full potential. Mercedes began taking in children who were abandoned in hospitals, police stations, etc and decided to create a foundation called, Fundacion para la Adopcion de los Ninos Abandonados, FANA (Foundation for the Adoption of Abandoned Children). The name was later changed to Fundacion para la Asistencia de los Ninos Abandonados (Foundation for the Assistance of Abandoned Children).

Mercedes, along with her family and friends began taking abandoned children into their family homes in Bogota. On February 4, 1972 The Colombian Family Welfare Institute and the Ministry of Justice approved the legal recognition of FANA as a nonprofit institution. This is considered to be the anniversary of FANA and a mass of celebration is held every year on this date.

The first real home was rented at the corner of Avenue 7A and 65th Street of Santa Fe de Bogotá. However, the location soon proved to be too small. Through great effort by Mercedes, who led countless campaigns on national and international levels, FANA was able to rent a house at #5-67 71A Street. Mercedes later purchased the adjoining house as well and FANA remained at this address for over 17 years. FANA’s most recent home, inaugurated in 1995, is located in Suba, a suburb of Bogotá. Again, thanks to enormous efforts by Mercedes, funding for this state of the art building was secured. This large building permits FANA to welcome up to 150 children. It is especially well adapted to FANA’s evolving mission of increasing its assistance to underprivileged families.

In 1979 Mercedes founded the Hogar Margerite D’Youville, which is a home for expectant mothers. Mercedes saw large amounts of single mothers who had little resources and founded the Hogar as a way to provide protection and in help alleviate the vast needs of single mothers. The Hogar provides a safe environment for pregnant mothers where they receive medical attention, psychological support and education, while they make the decision of whether or not to place their baby for adoption. Today, a sizable part of the FANA structure in Bogota has been reconfigured to accommodate expectant mothers who had previously lived in the separate Hogar Marguerite facility.

For more than 40 years, FANA has touched lives of more than 14,000 children in need by providing them with housing, food, clothing, health and education services, as well as ensuring they receive adequate social and psychological care. FANA’s dedication has allowed more than 10,200 children to find families through adoption and to uncover the possibility of a better future. Currently many children benefit from FANA, as they are placed there for protection while a decision on their legal status is made.

On May 8, 2012 Mercedes de Martinez passed away after a tireless fight with cancer, but her legacy lives on and has left an undeniable mark on thousands of children and families throughout the world. FANA continues to serve children in Colombia and Mercedes’ daughters; Elena and Maria Lucia continue the noble work of their mother, working for the right of every child to have a family.

The work Mercedes accomplished is universally recognized today as witnessed by the numerous medals and awards she received including:

The Gonzalo Jimenez de Quesada Award by the Mayor of Bogotá

The National Solidarity Award of Medellin, State of Antioch

The Protection of Youth Medal by the French Ministry of Justice 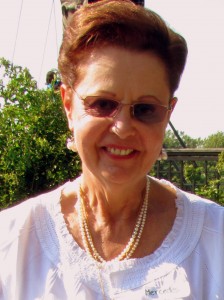 Click here to Register for the Annual Golf Classic Scheduled for Sunday, July 17, 2022

Click here to Register for the Annual Golf Classic Scheduled for Monday, July 18, 2022

There are no upcoming events at this time.